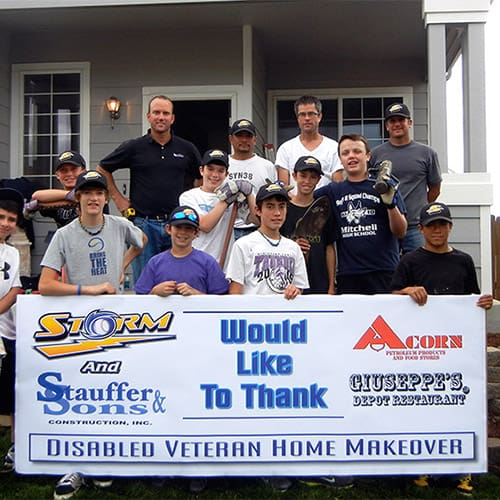 Stauffer & Sons Construction has just completed a special “Home Makeover” for a disabled veteran. We want to thank all the sponsors involved—we couldn’t have done it without you! We had so many volunteers helping out that it was humbling. Thank you to all the people who helped make Sergeant Lindsley’s home makeover such a success!

Zachary Lindsley served in the US Army and two tours of duty in Iraq. Zachary was a Sergeant in the 3rd Brigade, 4th Infantry division of the 1-68th Battalion of HCC Company as a senior sniper. Zachary sustained some Traumatic Brain Injuries (TBIs) and suffers from Post Traumatic Stress Disorder (PTSD) as well as back problems, but is glad to be back in his home with his family. In our opinion, Zachary is a true patriot and hero, yet quietly deflects any such praise, acknowledging his fellow soldiers who, in some cases, gave all.

We were very pleased to lead this project with the assistance of several local companies who acted as sponsors, including:

It was our goal to make his house even more of a home by performing a number of improvements in a single day make-over. Zachary, Angela, and their daughter Hailey Elizabeth were so happy to see the home when it was finished. The whole project came together better than we hoped. We were able to get dozens of businesses involved, and more than $25,000 in materials and services were donated. 70 individuals showed up for the work day. Our veteran, Zachary Lindsley, was very appreciative, and is now thrilled to be the beneficiary of a compellingly renovated home.