Cost of Property Taxes in Colorado (Lower Than Most States) 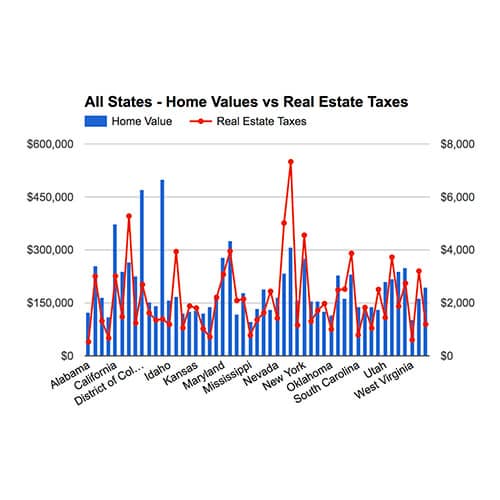 We’re proud of the state our company lives and builds in. For fifteen years, we’ve been building homes for families who move here from all over the nation because, they’ve found Colorado to be a wonderful place to live. People move to Colorado not only due to the beautiful scenery, fresh air, and room to grow, but also because the costs of living are quite reasonable when compared with other states.

In a previous post (“Cost of Building a Home in Colorado“), we took a look at a report recently shared by the NAHB (National Association of Home Builders), which shows that the cost of building a home in Colorado is reasonable when compared with other desirable areas to live in (especially compared to the East and West Coasts). Today, we’ll look at some survey data collected by the US Census Bureau that pertains to real estate taxes across the USA. The good news: the facts show that the overall tax burden of owning a home in Colorado is lower than a significant number of states. Take a look at some of the charts below to see the data in more detail.

What’s interesting when looking at the numbers, is that in contrast with our #12 ranking for home values, Colorado ranks #43 for effective tax rates. The median real estate tax bill Coloradans pay is $1,479/year, which is slightly lower than the national median of $1,809. This means we enjoy high home values, and low taxes, which is the optimal scenario. Who doesn’t want to have both a nice home and a low tax bill? Our effective rate for “RET” (real estate taxes) is 0.62%, which is lower than the national rate of 0.97%. In plain English, this means the average homeowner in Colorado pays a little more than one half of one percent of their home’s value in real estate taxes each year. This is great, especially when you consider the fact that real estate taxes pay for important community infrastructure that you actually use on a daily basis: fire departments, libraries, roads, bridges, snow removal and so on. So it’s nice to see that Colorado’s overall tax rate for the average homeowner is exceptionally low (lower than 41 other states) considering the property values.

It is important to note that while property values and real estate tax bills are correlated, the correlation is not nearly as strong as you’d think. For example, while Hawaii has the highest median home value, New Jersey’s real estate tax bill is the highest in the nation by far. Coming in at $7,331/year, New Jersey charges citizens more than six times what Hawaii does (a paltry $1,389, in comparison). Coloradans can smile again when reading this report, as our state is once again on the low end of the spectrum and ranks #30 at $1,479/year. (Since I’ve already told you who ranks #1, it’s worth mentioning that Alabama has the lowest tax bill of all at just $532/year).

Here’s another chart showing the same data shared before, but cross references the taxes paid and the home values. As noted above, these do not necessarily match up, and this chart is the proof of that.

We’re encouraged by these charts and the data they represent, and you should be too! If you’re moving to Colorado, we would love to meet with you and talk more about living here, finding the perfect lot, and building your home. Just contact us today and we’ll get in touch.