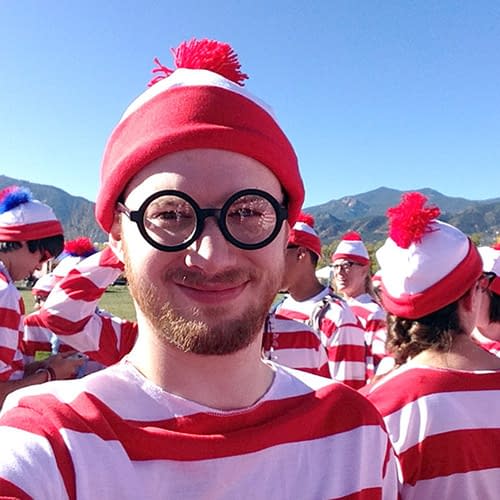 Last week, I was participated in one of the funniest “fun runs” I’ve ever heard of: the Waldo Waldo 5k in downtown Colorado Springs. I’m not a hard core distance runner, and I don’t often run these trendy, fundraising runs, but this one was too good to pass up.

It’s called the Waldo Waldo for two reasons: 1) it’s a fundraiser to raise support for rebuilding and restoring after the Waldo Canyon fire and the Waldo Canyon flood, and 2) everybody dresses up like Waldo from the “Where’s Waldo?” book series. Remember those?

The event was first put on last year, and about 1,000 people showed up. This year, 2,623 people came out to dress up and run, and who knows—it may well turn into an annual event. I’ve heard of plans for next year, but we’ll see.

Where’s Waldo? I found him!

So more than two thousand of us assembled at America the Beautiful Park on Sunday morning, all dressed up as Waldo, and when the gun was fired, we all started running. (If you’ve ever run a 5k, you know that the hardest part is not running itself, but trying not to trip over the hundreds or thousands of other runners and this run was no exception). We started up the Pikes Peak Greenway (back behind Colorado College) and ran about a mile and a half up, then turned around at a bridge, then headed back down. Pretty simple, but the trail was pretty narrow so it was really difficult to try to fit everybody in. (Plus, I’ve never been on a bridge with that many people before—it was a little unnerving to feel the entire bridge shake up and down as we crossed it).

One thing that was interesting to note was how we could see tons of brush and debris that had been washed up on the banks of Monument creek—all from the Waldo Canyon floods. So it was interesting to be able to see the kind of work that needs to be done, which was (incidentally) going to be funded by the charities our run supported. One of the main beneficiaries of the event is the TOSC (Trails and Open Spaces Coalition) which assists keeping our trails, bikeways and greenways beautiful.