[Sometimes, in the process of building a new home, or doing research for building a new home, our clients will hear the term “expansive soils” and wonder exactly what it means and how it might affect them. Soils that expand are common in Colorado, and mitigating against them is a major consideration when building a home here. To help demystify this critically important topic, we’ve asked our friend Chuck Milligan to weigh in with his advice on the topic. Chuck is a Soils Engineer (also known as a “Geotechnical Engineer) we often work with when we’re building a new home. We hope you find this information helpful. -Andy Stauffer]

Q: What are expandable soils? 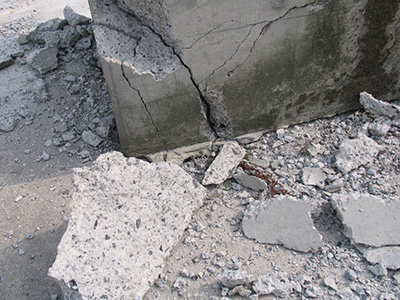 Expandable soils can cause cracking in your walls and foundation

A: The term expandable soils refers to a group of soils that can change volume when provided exposure to water. The two most common types are Clays and Silts. I say “clays” and “silts” in the plural because there are actually a number of differing clay molecules as well as silt types. All have specific individual properties, but share an affinity for water and will draw it to the soil whenever possible.

They also share a common characteristic of being very small in size. Clay and silt particles can pass through an opening 1/200th of an inch in size. This leads to a common term of “minus 200” soil when discussing the topic. Minus 200-size particles are similar to talc or flour in consistency.

Q: There are lots of terms out there: expanding soils, expansive soils, expandable soils, shrink-swell soils, swelling soils, and more. Are these all the same, or different, and which is the proper term?

A: Here’s a breakdown for each:

So for all practical purposes, it’s best to refer to them as “expandable” soils.

Q: Are expandable soils unique to Colorado, or are they found in other states or regions?

A: Many locations around the country have expandable clay soils. This has led to regional terms for clays such as Bentonite, Georgia Clay, Caliche, and Gumbo, among others. All are unique, but share certain characteristics as far as how they behavior during the construction of homes, septic systems, and retaining structures.

The geology of a region, as well as the manner in which soils were deposited over time, can change the specific soil characteristics. For example, what makes central and eastern Colorado different from other areas is our close proximity of the Front Range, and the transition from plains to mountains. Soils are modified over time by many things: the erosion off the mountains, the creeks running along the base of the mountains, and the seasonal moisture fluctuations (i.e. spring runoff). As a result of these factors, we have many different types of soils, often in a geographically confined space.

Q: In Colorado Springs, are there some parts of town that are worse than others?

A: Depending upon your location, soils can be expected to change volume when the moisture content of the soil changes. However, if the site is in an area with little or no clay sized particles (such as Briargate), soil movement is unlikely. In areas with more clay (such as parts of Rockrimmon and Fountain), movement is much more likely.

Yes, some parts of the region are notorious for having problematic soils, while others have little or no expandable soils. You can get a feel for the problem areas a few different ways: by asking your builder or your builder’s soils engineer, by checking geological maps of the region, or by having a soil test performed on a specific site.

One potential red flag to look for when building is when you find one single lot that hasn’t been built on in the midst of a completed subdivision; this can be a problem property. Also, be cautious if the selling price is seemingly too low with no explanation—it might be due to known soils problems.

Q: If I’m having a new home built, can I know if the land I’m building on has expandable soils before digging starts?

A: Yes, but with limited certainty. It is crucial to either review a soils test from a licensed engineer for the property in question, or have a drilled soil test performed prior to closing on the purchase of the property. Make your offer to purchase the land conditional on the state of the soils, since having expandable soils (or otherwise poor quality soils) can significantly increase the construction cost for building on your lot.

Oftentimes the presence of clay, or at least the extent of its presence, is not truly known until your builder excavates in preparation for the home’s foundation. It is important to keep in mind that the drilled soils test, while a critical part of the overall analysis and engineering protocol, will not always reveal the full soil profile

As a matter of standard practice and code requirements, an “open hole” inspection is conducted by the soils engineer after excavation. It is this open hole inspection that will reveal the suitability of the existing soils to support the foundation system as designed.

When expandable soils, or the presence of groundwater for that matter—another blog post altogether—are encountered, remember: don’t shoot the messenger! A good builder should prepare you for the possibility of expandable soils and the possible need for mitigative measures (such as the need for an “overdig”—more on that below) but he will be learning of the full extent right along with you, the property owner.

Be prepared for what could amount to considerable costs associated with these measures.

Q: What if we’re excavating on my land and we find expandable soils? What can be done about it?

A: Once it becomes known that expandable soils are present within the footprint of the home, (either by drill test, or upon the actual excavation, or both), there are engineered prescriptions that address both removing and mitigating its presence and effects.

The most common prescription in this case is what is called in the industry “an overdig”. An overdig is, just like it sounds, an over-excavation beyond what would normally be required to place the footers on virgin ground. The depth of an overdig is typically 4 feet or the depth required to remove all of the expandable soil, whichever is less. This overdig will also extend laterally to the same extent as the depth. Once the overdig is complete, suitable soil is imported from somewhere else and compacted as needed.

This is just a typical overdig scenario though, so keep in mind that each case is different and will require a Soils Engineer’s inspection, prescription and monitoring at prescribed intervals on the overdig and import/compaction of good soil.

An overdig can solve your soil problems, but it is expensive. The additional costs associated with an overdig are threefold:

All of these can be tricky to estimate going into the procedure, so your builder will do his best, but you may not know exactly what it will cost until the work is completed. In limited cases, there may be other things you can do instead of an overdig. Some of these include: the use of caissons, helical piers, or post-tensioned slab floors. All of these methods are generally employed when an over-dig is not sufficient at effectively mitigating the expandable soils presence, and further costs increases should be expected.

Q: What if my home has already been built? Are there steps that I can take to prevent soil expansion?

A: Generally, anything you can do that will limit or eliminate the amount of water retained by soils near your foundation is a good choice. 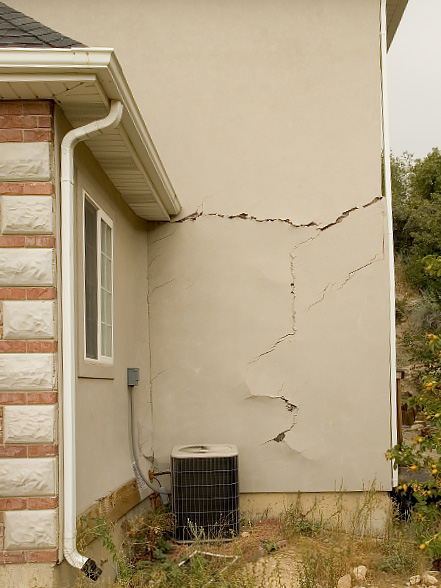 Soils that expand can cause cracking on walls

Here are a couple of suggestions for things you can do that may help:

The bottom line is, simply: try to prevent water from getting near the home’s perimeter in the first place so that expandable soils never have the impetus to expand.

Q: If the soil under my home expands, what kind of damage will it cause, and can it be fixed?

A: Soil expansion on a home can result in a number of different types of damage, affecting everything from the basement all the way to the top floor of your home: 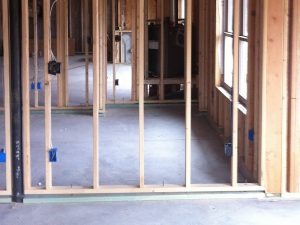 A floating wall framed in a basement

If your foundation is damaged, it can be repaired, but it may take some major work to fix it. This often includes helical repair piers or replacement/reinforcement of the existing foundation. (Note: this kind of work should be designed by a licensed Professional Engineer, not just a foundation repair craftsman or engineering technician).

For the most part, we don’t see a lot of damage due to expandable soils. It is not uncommon, however, even after mitigative steps have been taken, for non-structural concrete slabs to experience modest movement over time. Generally, proper construction detailing of the structure of any style house, along with maintenance of proper grading, drainage, and landscaping will minimize the chance of soil movement on any site.

Ultimately, the main thing is you just want to make sure that your builder is taking the proper steps to mitigate against soil expansion when building your home, and after you’ve moved in, make sure you try to keep water away from the foundation as much as possible. If you have any questions about building methods in Colorado, or have found that you need to mitigate for expandable soil while building on your property, feel free to comment below or contact Stauffer & Sons Construction here. Good luck building!

Chuck Milligan, Ph.D., is a licensed Engineer and the founder of Geoquest, LLC. Geoquest is a soils engineering firm based in Colorado Springs, Colorado. Chuck has a Doctorate in Construction Management and a Masters Degree in Geotechnical Engineering (both from Texas A&M University), and was previously a professor of Civil Engineering at the US Air Force Academy. Contact Chuck for your soils engineering needs by calling (719) 491-0556.