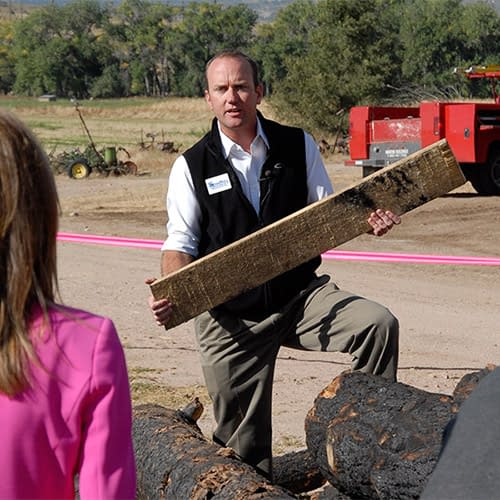 Stauffer & Sons Construction was featured on KRDO NewsChannel 13 this evening at 5:00pm about our efforts at Venetucci Farm. We’ve been building with logs that were taken from a home site in the Black Forest where we’re rebuilding for a family whose home was burned in the Black Forest fire.

The TV crew came out to the farm on Wednesday and interviewed Michael Hannigan (the Executive Director of the Pikes Peak Community Foundation, which runs the farm) and Andy Stauffer (our Founder and President). We had a great time showing them what we’ve been up to, and they had great questions about the project. Watch the video below to see the story. To read the web story on KRDO’s website, click here.

The shed (foreground) and barn (background)

Eric Singer: “From destruction to reconstruction; a piece of Colorado Springs history is getting help from one of the Colorado’s most devastating fires. Storm Tracker 13 meteorologist Rachael Plath is seeing it firsthand; one construction company turning tragedy into treasure – one scorched log at a time”

Michael Hannigan: “What a priceless piece of the history of Venetucci! It was about ready to fall down.”

Voiceover: “It’s the oldest building on the historic farm, but time took its toll.”

Michael Hannigan: “Basically, there was no roof on half of the building, most of the timbers had rotted and fallen down.”

Andy Stauffer: “You know, once you skin off the scorched exterior, and you get down to the core, it’s great wood for this purpose.”

Voiceover: “Using trees charred by the Black Forest Fire, Stauffer & Sons Construction is not only repairing this old barn…”

Michael Hannigan: “That’s all wood cut out of the black forest logs. This was completely gone, there was nothing here.”

Voiceover: “The wood is also being used to build a new barn on Venetucci Farm.”

Andy Stauffer: “The common thread is wanting to do something, and make something good come out of such a catastrophe.”

Michael Hannigan: “What a cool thing! To take something that was truly an emergency and disaster, and a tragedy for so many people, and have those dead logs have new life at Venetucci Farm.”

Voiceover: “Too rickety to use before, the historic barn will now be used for storage.”