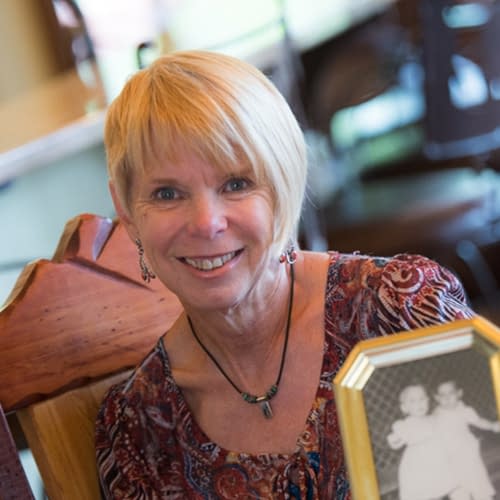 Neil and Barbara Bruce are a couple we built a home for back in 2011 up in Woodland Park. This month, we decided to drop by for a visit and see how they liked their home after living in it for a few years. (The home is a beautiful 3,800 square foot, three-story home designed by Langley Architects and is tucked away on a hill in the western side of the town).

We stopped in and asked Barbara a few questions about her building experience, how the home turned out, and how she likes the finished product.

Q: What was it about Woodland Park that made you want to live here and build a home?

A: My husband and I are both Colorado natives, and we’ve lived all over the state, but most of our lives were spent in Colorado Springs. What brought us up to Woodland Park was that, having grown up in Colorado Springs, back then, it was a small town, but over the years it has grown so much that it just got overwhelming for us and we couldn’t stand the traffic, so we moved up to Woodland Park which is much smaller and quieter. Though the winters are longer, we love it here.

The reason we decided to build was that my husband had a law practice with a business partner, and a few years ago his partner had a heart attack and passed away suddenly. It was at that point we recognized that life is short, and it was finally time to build the dream home we had always talked about but never thought we would actually build.

Q: How did you first meet Andy Stauffer, and why did you hire Stauffer & Sons Construction to build your home?

A: We hired David Langley, an architect here in Woodland Park, because we knew that’s who we wanted to work with and he’s done a lot of homes up here. We asked him which builders he would recommend and he gave us a list with probably six or seven names on it. We interviewed four of them and decided that Andy was one we wanted to hire. It felt like he would really listen to us and and help us design what we wanted, within our time frame, and within our budget. He really worked closely with the architect on the home’s design and when our costs started going over what our budget was, he helped reign it in and kept us on budget and on time! We actually moved in one week before schedule, so that was fantastic.

Q: Your house has a very nice Southwestern feel—what was the inspiration behind all that?

A: We’ve always enjoyed the Southwest and I feel like Colorado is part of the Southwest. My husband and I love going to Santa Fe: our kids live in Albuquerque, so we go back there all the time and we always collect things while we’re there. We had always wanted an Adobe home, but in the Colorado mountains it doesn’t work very well, so we came up with this design that I call “Santa Fe Mountain” style, and we love it.

Some southwestern elements were very important to me, like the Kiva fireplaces, and Andy had never built those before, so he worked hard to figure out how to do it right and I think the framing crew really nailed it, especially considering it was their first time. We really enjoy the fireplaces: we have two of them in the house and we use them all the time in the winter.

Q: You gave your house a name—what’s the story behind that?

A: I decided to give our house the nickname “Dancing Fox Lodge” because the house feels like a Bed & Breakfast kind of lodge, and shortly after we moved in, I looked out in the front yard and saw a fox playing with a mouse it caught. It was jumping up and down and looked like he was dancing, so I named the house after that.

Q: Since you built a custom home, you were able to have it designed exactly the way you wanted. What are some of your favorite features?

A: We have a loft upstairs with two easy chairs, side by side, and that’s where I have my coffee and newspaper every day, and it has a tremendous view of the mountains. Also, in the master bathroom, we have “his and hers” closets and a linen closet, as well as a door that goes straight out to the hot tub on the back porch. It really works out great.

The laundry room is my pride and joy: I got everything I wanted in it, and Andy built a platform for us to put the front-loading washer and dryer on so we don’t have to bend over to load and unload the laundry. They’re right at the perfect level.

Also, we want to live in this house until we’re taken out of here in a pine box someday, so we had it built so the garage floor and the floor when you walk in are at the same level with no step up, and we put the master bedroom on the main level so a wheelchair can go anywhere if we need one.

Q: Have you ever built a home before, or was it your first time? What was the building process like?

A: The whole process was just a blast. We had such fun running around to showrooms and picking things out with Mike Rice, the Project Manager. We’d never built a home before, and it was a lot easier than I thought it would be. Mainly for two reasons: first, we knew exactly what we wanted, and second, it was so easy working with Andy and Mike. I didn’t really expect that there would be so many decisions, such as choosing the colors for downspouts, and deck railings, and on and on… but it was easy because we were working with people who made it that way.

The only real challenge we had was that we wanted a very open floor plan, but we weren’t sure it was exactly right when we were looking at the two-dimensional drawings in the design phase. Trying to visualize what it would look like in the end was difficult and a little bit scary. But we knew the architect had done such great work in the past that we could put our trust in him and Andy was also instrumental in walking us through it and saying, “Yes, this will turn out the way you want.” So having the two of them work together gave us the confidence that our home would end up with our vision in the end. …and it did.

Q: You were evacuated from your brand new home when the Waldo Canyon fire came through Woodland Park. What was that like?

A: It was extremely scary. We had just built this big, beautiful home and had to leave it and hope for the best. There was a big plume of smoke coming up on the hill right behind us. My husband was at work at the time, so I had to get ready to evacuate by myself, removing all the patio furniture and setting out the garden hoses so they were ready to use if needed. We ended up leaving for four days. I found it strange: we live in Woodland Park; my brother lives in a cabin outside of Divide; my sister-in-law lives in Cascade, and my mother lived in Mountain Shadows in Colorado Springs, and all of us had to evacuate, all from the same fire. It was kind of bizarre. The fire was headed right in our direction, and was about a mile away, but then the wind changed so it went the other way. It was fortunate for us, but others were not so lucky. Without the wind changing, we would have been one of those families who lost their home.

Q: So what do you think now that you’ve lived here a few years? Do you still like everything about it?

A: We love it. We love how the house turned out: it’s just like I drew it when I sketched out a little hand drawing in the very beginning. I could not ask for a better kitchen, and we love the openness of the main floor with all the windows we have. We enjoy being able to look out from every side of the house and see our surroundings… that’s why we moved up here in the first place! Our wood floors are a little scratched up right now, but that’s because when my grand kids come over, I let them drive all over the floor in their little “riding cars,” but I’m a relaxed grandma… I figure in a few years they’ll grow out of that stage and we can re-finish the floors and until that time, I’m not going to worry about it!